This is one of the widely celebrated festivals that falls on the first month, Baisakh (April/May), of the Nepali Year. It is also called Mata Tirtha Aunsi as it falls on a new moon night. The Nepalese people have always been family oriented. They take great pride in their ancient tradition of closely-knit family unit. This sort of kinship is not only the result of religious teachings, but also due to various festivals and ceremonies, which brings the family together and strengthens the family ties in the Nepalese society. Such is the festival of „Mata Tritha Puja“ which in English is „Mother’s day”. This festival falls on the last day of the dark fortnight of April or early May. It is a day when one shows appreciation and gratitude to his/her mother for her unconditional love and undying support.
Mothers are the world’s greatest gifts and we don’t realize it a jerk, a clown or have higher IQ than Stephen Hawking, but your mother will love you all the same. The whole world may be against you but your mother will support you till the end. For mothers, their kids are the best in the world even though kids think everyone else’s moms are cooler than theirs. You may spend thousands of rupees on one of those so-called fine dining establishments in the city but your mother’s cooking beats anything on the menu prepared by professional chefs. You always miss your mother’s cooking when she is not around.
People pay homage to their mothers presenting her favorite food, clothing and various gifts on this day. Mukh Herne means „to allow someone as our relative or give respect or to recognize the achievement of or love to someone“. Mother’s day is not attached to a certain religion or a particular community. This occasion is observed by many communities across the nation.

In the pictures below you can see some of the Kopila kids giving presents to the house mother Maina. 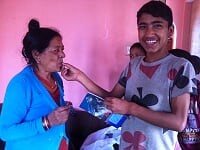 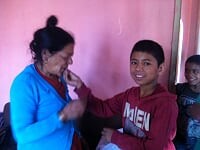 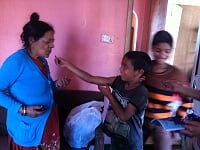 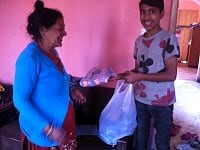 Goddess Saraswati Mata is regarded as the goddess of learning and music. It is believed that she is robed in white. She carries a lyre. She is seated on a lotus. She bestows vidya which means learning.

Therefore, the Saraswati Puja is a popular festival of the Students. It is celebrated by the Students in almost all schools and colleges in Nepal. It is celebrated on the fifth day in the month of Magh every year according to the Nepali calendar, which is in late January, especially in spring season. Therefore this festival is also called the Basanta Panchami according to the Nepali calendar. All educational institutions remain closed on this day. Students worship, the goddess with great joy.

Preparation for the celebration begins with the collection, of subscription from the students. The idol of the goddess Saraswati is placed in a hall which is properly cleaned and decorated with coloured papers. The idol is also decorated with such flowers as marigold and rose. The image looks beautiful and the atmosphere outstanding.

This is an auspicious day for the students. They abstain from reading and writing on this day only as a mark of respect to the goddess. Students enjoy this festival with great pleasure. A learned Hindu Priest is invited to perform the holy Puja of the goddess.

Normally students wear clean and new dress on this day. They pray the goddess for wisdom; they also offer flowers to the deity and sing the prayer-song in her honour. Another remarkable feature of the Puja is the breaking of coconuts in front of the deity. The Prasad is shared by the students, teachers and the guests.

Almost all children begin to learn education by this day. Which is another interesting part of the hindu culture. Often, the students arrange feasts. Cultural programmers are also arranged on the evening.

Normally, the immersion ceremony takes place on the next day. The students carry the image of the goddess in a grand procession to the nearby river. Often a band party is also arranged for the purpose. The celebration comes to the end with the immersion of the idol.

The function has a deep educative value. Students learn to be spiritual in their life. They also learn the value of co-operation, amity and leadership. 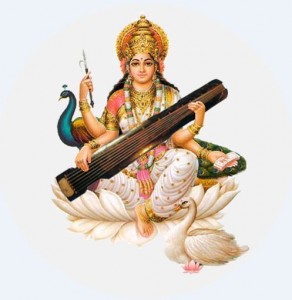 Guru Purnima is a Nepalese festival dedicated to spiritual and academic teachers. This festival is traditionally celebrated by Hindus, Jains and Buddhists, to pay their respects to their teachers and express their gratitude. The festival is celebrated on the full moon day (Purnima) in the Hindu month of Ashadha of the Shaka Samvat, which is the known as Hindu calendar in in Nepal. This day marks the first peak of the lunar cycle after the peak of the solar cycle.

The celebration is marked by ritualistic respect to the guru, Guru Puja. The Guru Principle is said to be a thousand times more active on the day of Gurupurnima than on any other day. The word guru is derived from two words, GU and RU. The Sanskrit root GU means darkness or ignorance, and RU denotes the remover of that darkness. Therefore, a guru is one who removes the darkness of our ignorance. Gurus are believed by many to be the most necessary part of life. On this day, disciples or students offer puja (worship) or pay respect to their guru. In addition to having religious importance, this festival has great importance for Nepalese academics and scholars. Nepalese academics celebrate this day by thanking their teachers as well as remembering past teachers and scholars.

There may be different kind the teacher and teacher of the different field. We believe teacher means not only the teacher who has taught us in the school and college. In your practical life you can find and meet the teachers who have shown you the correct path and the way to the success. Skill in human is the very important thing. Education is the key of the light.

Every student of the school and college prepare themselves from the morning to greet their Teachers. Students shares flowers and greeting card to teachers as well as sweets. This day is marked by the students conducting some ritual ceremonies and also through performances and speeches.

In conclusion, every Year Nepalese people celebrate Teachers Day on the full moon day of the July-August. On this teachers day every student greets their Teachers and take the blessing from the teachers for the further improvement. Teachers are the guidance of the path for the student. The effort done by the teachers is the priceless. They are the guidance to the way of the success. Hence from the ancient period teacher’s day Guru Purnima is annually celebrated in Nepal.